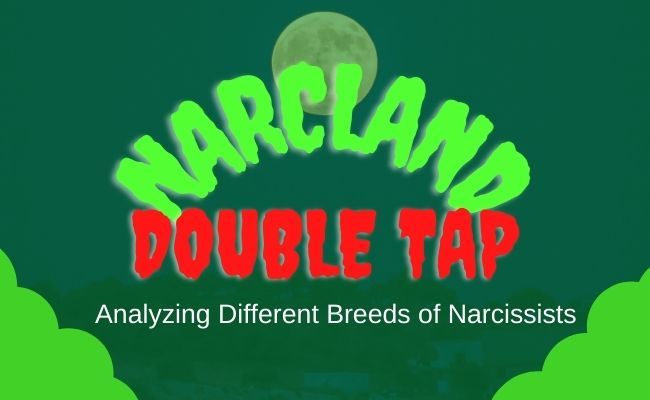 If you’ve watched any recent movies or television shows lately, you can see how zombies don’t come in a one-size-fits-all.

Zombieland: Double Tap, the 2019 second installment in the Zombieland comedy series, has introduced different breeds of zombies to the mainstream. And while zombies might provide some much-needed entertainment value, their survival strategies might feel a little too familiar.

Because just like zombies, there are different breeds of narcissists. Likewise, some of them use those same soul-sucking techniques zombies use during an apocalypse. With that said, maybe some of the following descriptions ring a bell to you.

Chances are, you’ve watched The Simpsons at some point during your life. We all recognize Homer Simpson as the classic and beloved fictional character, well-known for his low IQ and perpetual clumsiness.

Just like Homer Simpson, these narcissists tend to be slow, stupid, and embarrassing to everyone around them. They are a stark contrast from the stereotypical smooth-talking, classy narcissist most people think about when they imagine narcissism.

Most Homer narcissists just end up failing spectacularly at accomplishing all their “grand plans.” They may think out an entire strategy- only for it to explode in their face. These can be the narcissists with long rap sheets of legal issues, employment gaps, and strange relationship timelines, and it’s all because they can’t get their priorities straight.

Classic, Homer narcissists do exist, but some may be more destructive than they seem. Some “homer-like” narcissists will try to use their silly demeanor to trick people into thinking they’re dumber than they really are.

Others will capitalize on their wit to lure people in, knowing that if they can make them laugh, they can brush even the meanest comments off as “just making a joke.” Of course, their jokes aren’t funny, and their sense of humor tends to get old fast.

Most Homer narcissists try to get other people to feel sorry for them. For example, they may blame their laziness on some external factor. Or, they might claim they can’t get a better-paying job because nobody will give them a good reference. In other words, they may turn to quickly play victim to solicit empathy and attention.

Be careful with these narcissists. Even if they seem sloppy (or even endearing), they cause significant damage wherever they go. They don’t quite know how to plan out consequences, and they end up seriously hurting people to get what they want.

Just like Stephen Hawking, these narcissists are highly gifted and clever. But unlike the talented, world-renewed physicist, their motives aren’t about improving the well-being of humanity.

Instead, the Hawking narcissist thrives on their uncanny ability to problem-solve and use their intelligence to get what they want. They share similar traits to sociopaths, and they often hold powerful roles in medicine, academics, politics, law, and business. Ironically, some of them may enter helping professions, such as therapy or social work. The job title itself doesn’t matter: the Hawking narcissist wants power and control, and they want to influence others with their brilliance.

To the rest of the world, they’re pure genius. The Hawking narcissist revels in this attention, but they also expect it. After all, people have reinforced their intelligence since early childhood.

Once you get a bit closer, you might realize that it seems like this person is always ten steps ahead of the game. They know how to prepare meticulously- if you think you’re getting away with something, they’ve already anticipated your thoughts and strategized against them.

Sometimes, the Hawking narcissist will employ other people to do their dirty work for them. This is especially true if they hold powerful positions- they don’t want to deal with the fallout should something happen. They will bribe, cajole, steal, and manipulate others as leverage.

In more insidious cases, the Hawking narcissist knows all about narcissism and uses that information to their advantage. For example, they may read about the latest narcissistic research and use those insights to strengthen their toxic identities.

The ninja narcissist is sharp, fast, and subtle. Above anything, they are sneaky with their tactics. Unfortunately, this kind of narcissist often hits you with manipulation long before you recognize their behavior.

Ninja narcissists tend to be more covert because they may present as harmless and even kind. But, unfortunately, they rely on a myriad of gaslighting techniques to manipulate their victims.

For example, let’s say you just began working at a dream job. The ninja narcissist might list various reasons why they don’t like your boss, and they will validate you emphatically if you ever complain about work. At first, it may seem like they just want to support your best interests. But if you dig a little deeper, you might recognize that their real motive is to cut you down.

Ninja narcissists look after themselves, even if it appears that they’re trying to stay out of everyone else’s way. They may be more insecure or socially awkward than other narcissists, but their motives are always entirely self-centered.

Ninja narcissists are skilled in making people second-guess themselves. Often, this happens because they are so indirect and passive-aggressive in expressing their needs. They love making people squirm, and they also enjoy turning on and off different moods each day. With the ninja, you never know what’s in store. But their goal is clear: get ahead and don’t make a fuss about it.

Named after the infamous Terminator, the T-800 narcissist refers to the narcissist that just won’t quit. It seems like they can live a thousand lives and survive any setback without much recourse. No amount of smearing, canceling, or other practical disasters ruins them- if anything, they appear to get stronger from these obstacles.

Having any form of a relationship with a T-800 narcissist can feel exhausting. They just seem indestructible, no matter what life throws at them. And because they aren’t fazed by the possibility of failure (since they have stared it in the face so many times), they aren’t afraid to put everything on the table.

The T-800 narcissist can lurk anywhere, but many of them also hold important positions of power. Some of them are celebrities, where even “bad news” is good news. They are strong and powerful, and they know it.

T-800 narcissists can be dangerous because they are relentless in pursuing what they want. If you don’t talk to them for a day, they might blow up your phone or stalk you at work. Even legal matters might not dissuade them. After all, they are resilient. They just assume they’ll deal with the fallout when it inevitably arises.

Some narcissists act differently with people depending on the context. For example, their narcissism may be far more subtle in the workplace than it is at home. Or, the greater community might perceive the narcissist as an excellent member of society, but their partner knows otherwise.

Narcissists can and do disguise parts of their personality. Most of them are smart enough to recognize what’s permissible in most contexts. They will happily put on an act to gain approval from others.

Some narcissists become more skilled in their efforts as time goes on. For example, they may present as stumbling and idiotic at first (like a Homer narcissist), but with dedication, they may show more Hawking-like traits.

Keep in mind that the exact breed is largely irrelevant. If you’re asking yourself which one is most dangerous or toxic, it doesn’t matter. All breeds of narcissists are hazardous to your physical and emotional well-being, and they can all cause lasting damage to your life.

Humans are fluid creatures, and narcissists rarely fit into a single category, but if you’re constantly feeling disrespected, belittled, or insecure around someone, those are red flags. Try to avoid getting too preoccupied with focusing on small details. Doing so may contribute to you missing the full picture.

Can These Narcissists Become Better People?

While anything is possible, the chances of a narcissist changing for the long term are extraordinarily slim.

That’s because most narcissists are far too invested in preserving their egos than they are in compromising, communicating, or supporting their loved ones. Because they have no empathy for others, most of their actions tend to be highly self-centered.

It’s not your job to change or fix the narcissist. Taking on this task will likely result in enormous frustration. If they’re already disappointing you now, there’s a good chance that pattern will continue in the future.

Double-tap is a well-known shooting technique where someone fires two shots in rapid succession at the same target. When dealing with narcissists, you can also practice the double-tap effect.

In this case, double-tap consists of going no-contact (or Extreme Modified Contact in case of shared custody) and blocking the narcissist at the same time. With this approach, you’re removing their toxic behavior and influence over your life. You are choosing to embrace a new path towards freedom.

How to Get Help

True recovery from narcissistic abuse is a spiritual battle between good and evil. It’s a battle for your psyche and soul, and when you succeed on that level, then you start to triumph on every level.

Don’t blame yourself. A person’s choice to be abusive isn’t because of anything you’re doing or not doing. You’re not the cause for their behavior, no matter what they say.

Taking care of yourself is the biggest priority.  Here are some helpful tips and resources:

1 – The Beginner’s Healing Toolkit is a free resource that includes everything you need to get started on healing your life after narcissistic abuse.

2 – The Essential Break Free Bootcamp – Explore techniques derived from behavioral therapy (vetted by the psychological and neuro-psychological communities) to finally heal your life.

3 – The THRIVE program – Rediscover your lost self after narcissistic abuse (and prepare yourself for true love).

Everyone has the innate capacity to heal themselves. But, it’s likely you will need external support to heal the traumas that get in the way of your ability to tune into this gift.⠀Helpful tools and resources can assist you in developing effective ways to break free from narcissistic abuse.

Trauma Dumping: When Venting to Family and Friends Turns Unhealthy

Thanks for a very interesting and informative article.
I’ve grown up with at least one narcissist and am likely married to one. I sometimes wonder if I’m one, too. Or it’s a sort of learned behaviour. Could you please write about that? Thanks in advance!

I have, in fact, written about that topic. You can read the article here: https://kimsaeed.com/2020/09/27/are-you-a-narcissist-these-4-signs-reveal-all/

I hope it helps clear some things up for you!

Fantastic article! So bang on target on detail and the big picture, and wise and judicious on the takeaway. Thank you, Kim.