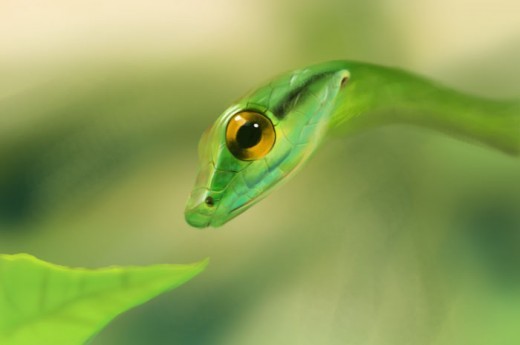 Esmeralda has a story to tell, but she can’t tell it herself because she is wrapped in the arms of transformation, the likes of which she has never before experienced, and it has stolen her words away.

She slithered into my life like a shimmering apparition, emerald hued, with flecks of radiant pink and glittering gold. Her beauty was beguiling, and ran deep below the glorious surface of her scaly skin. She was wise beyond her years, able to grasp knowledge from the ether and relay it with delicate charm. When she breathed, butterflies swarmed to catch a ride on her uplifting sighs. When she moved, her body wriggled and writhed with the exquisite pleasure she felt being a child of Mother Earth. Her emotions were raw, ravenous poems which swelled and flowed with the phases of the moon. And her voice was the echo of the music of the universe, when she spoke you could hear nothing else. It was bliss.

Then it came, the change. An inexorable, irresistible force. The ground beneath Esmeralda began to move, though she stayed very still. Feelers of black unctuous fog rose up from small crevices, and encircled her body, covering her radiance. She struggled in fear, fiercely, proud, but as strong as she was, each effort she made to escape, aided and abetted the dark supernatural force which had come to claim her. The more she tried to regain control, the quicker she lost it. She cried out in pain, screamed for help, but her voice went unheard, for with each cry the darkness absorbed more of her, until she could no longer utter a sound. Her words were gone.

And then she was gone, into the earth, far from the surface world, sinking deeper and further down into the depths of that which lies below. But the earth did not mean her harm. It was not an evil force. It was enveloping her to protect her. It was time for her to visit the underworld, to meet its inhabitants, to learn of their ways, and know of their magic, for she was to undergo a rite of passage which would lead her from youth to maturity.

All beings must suffer the pains of growing, every year, every day, every moment of our lives, but there are certain points which are greater than others, where we can feel our old selves being ripped away like dead skin, to reveal the fresh, new flesh underneath. It never happens unannounced, it warns us way ahead of time, we feel beset by restlessness, irritation, a depressing sense of pointlessness touches our hearts with cold clammy fingers, and sometimes we want to die, but it is not really physical death we seek, though we sometimes believe it is, it is metaphorical, metaphysical death, for the old, outworn self to pass away, so the new, emerging self can be free to take its place.

Esmeralda knew all of this intuitively, instinctively, but she did not fully comprehend how much it would affect her. She was a young snake, she did not have the knowledge which can only be acquired by experience, and is only bestowed by passing through the ritual. She knew it was time to shed her skin, but she thought this only entailed changing her personality, identity, friends, lovers, homes, career, she did not realize that those are but the outer manifestations of the inner. Intellectually she did. But the intellect is a superficial thing, true knowledge lies deeper.

To grasp an experience you must eat it and it must eat you, and then you must pass through the digestive system, down into the lowest, darkest parts, until you emerge from the other end, having absorbed the nutrients and gotten rid of that which is no longer necessary.

Esmeralda was always in complete control, even when she claimed she was not. She was the master of her movements, her slipping, sliding, and side-winding. She chose when to shed a skin, shape-shifting on a whim, at her own pleasure, letting go when she had had enough, was bored of old things and people, and wanted the sensual rush of the new. She was the one to do the pushing, if you pushed her away she would only go if she chose to do so, for her grip was very tenacious, although pushing back with equal force was a way to convince her to allow you to go, for she did not like to be pushed. She loved being in control, she craved power, and she possessed vast amounts of it.

Metamorphosis takes time. During this time, it demands that you let go of your need to control, yourself, others, your thoughts, your emotions, your life. It does not make deals or compromises. You must lose everything first, your beliefs, identity, power, abilities, for to be given new treasures you must renounce that which you feel you already possess. You cannot believe you are beautiful as long as you hold onto the belief that you are ugly. And that applies to everything. How can you fully embrace your new life, when your arms are holding on to your old life.

Esmeralda is very quiet now, but she has not yet accepted the silence. She has let go, but she is deviously still holding on to the secret thought that she can regain control if she pretends convincingly enough that she has renounced it. And, in many ways, what she is doing is part of the process, for shedding a skin involves a struggle, the friction helps to release the old flesh. And the muscles which are being exercised will be needed to climb back to the surface world once she has been released from the underworld.

Wish her well, she shares her story with you through me so that you may see that the darkest of times do not mean you the harm you may think they do, the furious battle against it is part of the process, as is the eventual surrender, the letting go, and moving on, through the pitch blackness into the light on the other side.

AnUpturnedSoul is one of my favorite bloggers on WordPress.  To me, her philosophy is a combination of that of Socrates, the Bhudda, Jean-Jacques Rousseau, and Rumi all-in-one.  (That’s not an exaggeration).

How to Overcome Fear After Narcissistic Abuse

A Lesson in Self-Love after Narcissistic Abuse

I read it over and over….
So wonderfully inspiring…
Thank you

I’m so happy to know it resonates with you, Anon 🙂

Wow, what a poetic description! Very metaphorical of my own belated transformation including current legal name change because my abuser murdered his final victims 20 years ago, currently undergoing post-conviction appeals. Talk about red tape changing one’s name for reasons “other than marriage or divorce!” I just tell the truth and have received lots of support. It’s an opportunity to educate young women in particular about early red flags when dating abusers and about disordered personalities. Easy to lose the forest for the trees (and 1.5-hour long holds with Social Security!).

Thank you, Kim, for your affordable, well organized and knowledgeable recovery course (which I am taking currently) and for your on-going education and advocacy of victims and survivors of narcissistic/psychopathic abuse, which many unfortunately do not survive.

[…] Esmeralda the Snake by AnUpturnedSoul […]

Wow, what a coincidence 🙂

Wow, what a coincidence 🙂

This is so inspiring and comforting all at the same time! Thanks for sharing it!

what a perfect way to capture growth/change/shedding of the old skin/light/dark. Stories such as this heal our souls. We see ourselves reflected back to us in a way that is primal and intense. I am so glad you shared this!

Thank you for your powerful comment. Upturned Soul has many articles that heal the soul on her site 🙂

This is wonderful. The analogies made here are so well done.

This is one of my favorite posts by UpturnedSoul 🙂

I didn’t even want to write powerful as it seemed to be lacking proper description.