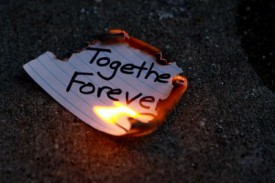 When You Should Consider Breaking Your Promises

I’m not referring to the promises you make to your parents or your friends.

And you should certainly keep the promises you’ve made to your children.

However, there are times when you should consider breaking the promises you made when you married a lying, manipulative cheater.

There are many reasons why women and men stay in bad marriages, but one I’ll talk about today comes up often when I’m working with clients.  And truly, it’s heart-rending because I remember what it was like when I was in their situation.  After all, I was once so determined to make it work with my ex that I agreed to be his second wife, but that’s a little extreme and not applicable in most cases.

There is a similar reason, though, which I discuss below.  Following is one of the top reasons people tend to stay in bad marriages, and why adhering to it can ruin your life:

I don’t like being a quitter or breaking my promises

I won’t speak to whether divorce is a sin.  Each religion has its own criteria and exceptions.  With that being said, I’ve had clients whose partners were members of the clergy (male and female), and used religion as a tool to “counsel” others on the sins of divorce and cheating while carrying on their own extramarital activities – so be careful from whom you seek counsel, even within the Church.

What I’ll discuss today is the phenomenon of people having been so conditioned by generational dysfunction that they believe if they divorce their toxic partner, it would make them quitters, losers, and black sheep of the family.

What do I mean by generational dysfunction?  For starters, past generations stuck to the philosophy that marriage was for life, insisting on staying with the person they married, all while there was emotional and physical abuse going on, alcoholism, drug addictions, child abuse, and so on.

Our parents were largely raised by mothers and fathers who were neglected and abused themselves.  Consequently, many of us are so greatly affected by our parents having stayed together that we are codependent, depressed, on anti-anxiety medications, and stay in our own bad marriages or relationships.

Others turn out to be narcissists (but you shouldn’t use that as a reason to justify their bad behaviors or feel sorry for them).

I was once so conditioned by false beliefs and hypocritical societal norms that I believed I had a duty to stick through it all – because that’s what Mom and Dad did, as did my grandparents and great-grandparents, etc.

Or, maybe your parents divorced when you were young and you want to keep a “stable” family unit for your children.  If there is abuse and dysfunction in a marriage, that’s the opposite of stability, and in fact will likely perpetuate the dysfunction – especially in cases where children witness emotional and physical abuse and/or are targets of it themselves.  They grow up believing that love and marriage “naturally” include certain elements of betrayal, abuse, and the allowance of those acts.

Which is why we stayed/stay in our own toxic marriages and relationships.  Sure, there are psychological and biological addictions and trauma-bonding going on, but had we healthy beliefs about what love and relationships are all about, we wouldn’t stay long enough for those to kick in.

Don’t be a martyr

Why should you have the self-sacrificing resolve of Mel Gibson’s character in “Braveheart”, when your cheating, lying partner is out in the world desecrating the marriage vows you took with them?

Why should you stay in a marriage you know is wrong for you and your kids because someone else thinks it’s the right thing to do?

When will you do what’s right for you (and your children) and let go of the opinions and beliefs of others?

I got to that point.  I was so miserable and exhausted at the end of my marriage that I didn’t want to live any more.

I decided to stop being a martyr, break the promises I made to my abuser, and live true to myself.

Now that I’ve been out of my own toxic marriage for a a while, I am proud to say that I’ve healed enough to where I am no longer affected by the way I was mistreated, nor do I experience sadness or remorse when I think about my past with him.  Well, save for one regret – I stayed in the dysfunction too long and there may be repercussions regarding my children’s sense of themselves.

My oldest son is showing early signs of codependency and my middle son struggles with authority figures.  I can say without a doubt that the time I spent in my previous marriage may affect my sons throughout their lives.  I should have left much earlier.  Now, I can only help them and lead by example.

Leaving wasn’t easy.  There were times when I didn’t have the money for a cup of coffee, but I am now reaping the benefits of my decision…and my children finally know what it means to live true to oneself and that if someone is abusive, oppressive, or just plain mean, then we have every right to kick them to the curb – married or not – regardless of who they are.

Why Going to Therapy with the Narcissist is a Bad Idea

When The Narcissist Can No Longer Control You: 12 Things That Happen

What to Do When You Have a Narcissistic In-Law

I am really struggling with a friendship that’s over with a N. He was the only one in the world I told about being sexually abused years ago and he’s used it to blackmail me. He writes stuff about me on social media yet I’ve never said a word about him. I do miss him in my life as the friend I thought he was.
I can’t see a way forward and I’m at the end of my tether.

So true, Kim! I was not only bound by this kind of thinking (I’m 68 now) but I was terrified that I could not earn enough to keep a roof over my kids heads. My N made it clear that if the marriage failed, he would disappear and leave me without child support, and I believed him. Still do. He punishes like that. Things were a bit different back then than they are now, as I understand it.

I stayed until after they were grown, but there are certainly repercussions in my children’s lives due to this. Trying to work through all of that now. I don’t see that my fear around my own ability to earn more, at that time of my life, was displaced. I changed my career path and finally was able to out-earn him, but not before the kids were grown. As I think about it now, we were not only shamed for the idea of divorce, but shamed around the idea of accepting help.

I really appreciate where you said “Sure, there are psychological and biological addictions and trauma-bonding going on, but had we healthy beliefs about what love and relationships are all about, we wouldn’t stay long enough for those to kick in.” Thanks for that observation. That is my take exactly.

In my family of origin, my N father was one of those clergy people who presented himself to the outside world as one thing and was another thing entirely behind closed doors at home. My parents hammered all seven of their children about the evils of divorce. They stayed married their entire lives, but my mother died a very bitter old woman. I sure don’t want to do go there.

I was helped a lot by the book by Leslie Vernick, “The Emotionally Destructive Marriage.” She explains that yes, God hates divorce but that marriage itself is not more important to him that the people in it. Leslie encourages us to believe that God never intended for us to live in abuse, and she brings in Bible verses that most churches leave out. Those trying to come at this from a Christian perspective may get as much out of her book as I did.

I will certainly not invite another person into my life who is abusive, oppressive, or just plain mean, and should they fool me and show their true colors later, I will certainly kick them to the curb!

What if the narcissist is your oldest son is the problem. Always expecting you to give him money to bail him out of his latest escapade? We have finally told him ‘no more’. He is 43 years old now and he needs to get a job and be responsible instead of ting to Europe on a whim with no way to return. How do you deal with that?

The worst is- he will not talk at all.even to the kids

Try not to let them be aware of that fact…just say he’s busy or something, otherwise they may believe they are to blame. Children, especially younger ones, internalize the rejection and believe they are at fault.

Thank you! I need this today. My husband walked out- 2 months ago- repeated affairs and I emailed him I missed him. Better to move on.

Sent from my iPad

Thank you for sharing, Elizabeth 🙂 Best of luck!